Awareness is the first step - Be safe! 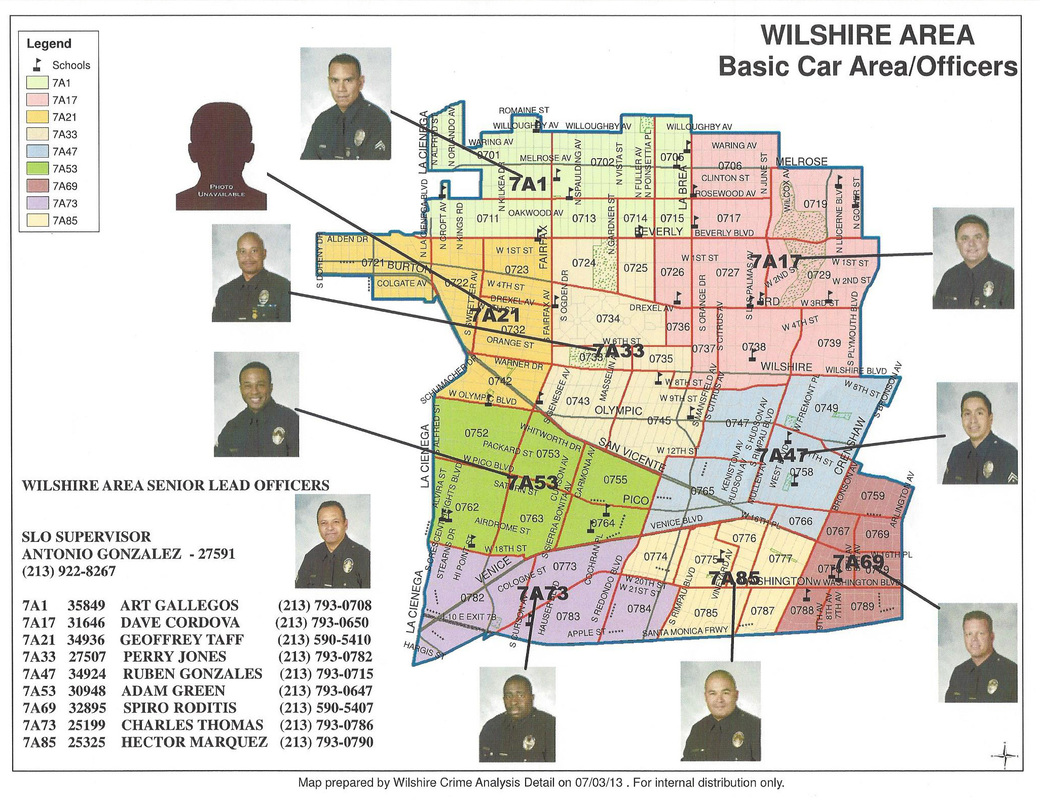 3. Introduction of Officer Cordova. Justin introduced Officer Dave Cordova who began by discussing how this neighborhood has very minimal crime by comparison to other neighborhoods.  The most prevalent is car break-ins.  He stated that people should take an inventory of anything they leave in their car and should try to leave nothing of any value that can be seen.  Officer Cordova made the following recommendations:
We must also make informed and wise decisions about how and when to leave home windows and doors open.
We should have block captains for every block and they should have contact info for everyone on their block.  The neighborhood association should have a safety captain.  If officer Cordova gives info to the Safety Captain, it is up to him/her to put that out to the appropriate block captain/s who will provide that info to the neighbors.

Neighbors should look out for one another and should report anything suspicious to the non-emergency LAPD number: 877-ASK LAPD.
People should be cautious about information they provide on social media. Writing that you are going on vacation for a period of time informs anyone looking that your house will be empty.   LAPD now uses social media to communicate with communities.  We can access info about our neighborhood at www.lapdwilshire.com.  LAPD now provides an app for I-Phones for free available from the app store.  He also recommended that everyone sign up for E-Police on-line.  Don Hunt interjected that all of these links are available on our web page at www.SouthhollywoodNHA.org under the “help” heading.
Officer Cordova advised that every day the police have a series of discussions about what the crime situation is for certain areas and they designate patrols to those areas where they believe crimes may take place.

He talked about how homeless issues are a problem and how they are no longer able to enforce some laws related to homeless that they could in the past.  His experience with outreach to the homeless has resulted in very few takers.  About 1/3 like the lifestyle, 1/3 are crazy and 1/3 are on drugs.
It is not illegal to be homeless.  For the police to take them in, they have to be a danger to themselves, a danger to others or gravely disabled.  Or, of course, commit a crime.  When there is an encampment, the police have to call the Bureau of Street Services, they send out an investigator (which takes about 1 month), the investigator notifies the homeless that they have 72 hours to leave and if they don’t, the police can call the Department of Sanitation and throw their stuff away.
Gangs have gotten into residential burglaries as the penalties are far less than if they commit crimes in which guns are involved.  But, our neighborhood has no gangs.  Still we must be persistent in looking out for each other.  Most arrests come from witnesses reporting crime and not from the police arriving when the crime is in progress.

The first question involved the effectiveness of home alarms.  To be effective, alarms must always be used, and they are more effective if they have some kind of loud bell.  Equipment should be upgraded regularly.  There is a personal and financial choice that those with alarms face regarding the order in which the police are called when an alarm goes off.  Because there is a charge if the police go on a call for an alarm, many choose to put the police way down on the call list, which results in the police not arriving at the scene for some time.  Obviously, the police need to arrive fast for a real crime, however there are false alarms.
There was a question about the effectiveness of private security patrols.  It is a personal decision if people want to use private security companies.  However, we should all assess how safe we have made our properties.  How much lighting do we have? Criminals like the dark.  Do we have shrubbery around the house?  Criminals like to obscure their activities and large bushes help to obscure their activities.
Recently, there have been more daytime burglaries in which people dress up nicely, knock loudly on doors and if someone answers, they make an excuse for being in the wrong place and if not, they may break in. So, if someone knocks on your door and you feel suspicious, call it in to the non-emergency LAPD number.
Numbers to call:  For emergency, (medical, fire or crime in progress) 911.

To report suspicious activities or a crime that has already occurred call 877-ASK-LAPD.
Wilshire Division can be called directly if there are questions at 213-473-0476.
And lastly, call Officer Cordova at 213-793-0656 or email at 31646@lapd.lacity.org . When he is on-duty, the cell phone is on, but when he is not, the phone is off and no messages will be returned until he is on-duty again.

There was a question about citizen rights to tackle and hold a criminal.  We have a right to protect ourselves and our family and if threatened we can use reasonable and necessary force to do so.  If a criminal is fleeing, there is no immediate danger.  Officer Cordova recommends that individuals do not try to catch the criminal as it presents a greater danger to the possible victim.

There was a question about the time it takes for an officer to arrive to take a report.  Officer Cordova explained that sadly, there are not enough officers and those on duty must prioritize their time by responding to crimes in progress and that report taking must take place when there is a slow time.  He mentioned that there is a system for making report appointments.  This entails not disturbing the crime scene until the officer arrives, but will involve less time being wasted by the victim.
There was a question about citizen groups helping to enforce laws.  In many cases the civilians had no training in how to defend themselves or correctly approach a situation. Also, the police cannot endorse these groups as their endorsement might result in liability should something go wrong.  Anyone can go and talk to anyone, however, one should never put themselves into a situation in which there might be complications and/or danger.
There was a question regarding the effectiveness of Neighborhood Watch signs.  He doesn’t have any data regarding this, but it seems as though the signs are probably not very effective and they cost a fair amount of money to put in.  The most important thing is to be organized and have good neighborhood communication.

A neighbor commented on how the nightclubs on Santa Monica Blvd just north of us are well patrolled by LAPD Hollywood Division, however, troublemakers come down into our neighborhood and we do not get patrols from Wilshire Division on those nights.  Officer Cordova said he will correct this problem.
There was a question regarding how to coordinate a Neighborhood Watch.  Officer Cordova suggested that we have a email/phone list that the crime captain(s) should have access to so that every time there is a crime being reported to LAPD it should also be reported to the crime captain(s) so that the information can be disseminated throughout the neighborhood.  If there is an event taking place now, the neighborhood having this information could help prevent the crime, or help give the police better information as other neighbors will be watching and may witness something that is helpful.
There was a question about gangs in the area and Officer Cordova stated there are no identifiable gangs in the area.  There is sporadic tagging, but it is minimal. If we see tagging in progress, Officer Cordova says it is a crime in progress and therefore could be a 911 call.
There were some questions relating to trash and human fecal material left on the street.  These are issues where individuals should call 311 to be directed by city operators to the correct department.

It was mentioned that sometimes the LAPD does not answer the phone very quickly and therefore a number of crimes may not be reported.  Officer Cordova expressed the importance of reporting all crimes.  If a crime is minor and someone cannot get through to LAPD, at least report it to Officer Cordova so that he can track it to see if there is a pattern of crime happening in an area.  If so, he will dispatch more patrols.
A neighbor mentioned that he had heard from numerous neighbors that they had had resistance from LAPD dispatchers with dispatching police for minor issues.  Officer Cordova suggested that if someone feels they are not receiving the appropriate response from a dispatcher, they should ask to be connected to the Watch Commander.  That is the person in charge of the officers and he/she will decide if your issue is valid based on LAPD criteria.
The final question related to whether motion detector lights were more effective than a constant light and the answer was that either type is effective.

5. Discuss how the Neighborhood Watch will work, formalize the committee and action plan.  Justin mentioned that we had not had time to get to actionable items #5 & 6 on the agenda, so he will be scheduling another meeting to put forth how to put into effect the discussion topics of this meeting.